For Girl Scout Samantha, being paired with St. Agnes President and CEO Bonnie Phipps as a Distinguished Woman Shadow was a perfect match. Samantha has aspirations to work in pediatric medicine and she spent her day with Ms. Phipps getting an inside look at how a hospital operates.

“I wanted to become a Distinguished Woman Shadow Girl because I thought it would be a great experience. When I heard Ms. Phipps was one of the Honorees, that made it even better since I’m interested in going into the health care industry,” Samantha said.

Samantha toured the hospital’s pediatric, NICU and emergency units with Ms. Phipps and Dr. Michael Burke and was able to talk with several nurses and doctors and ask them about their careers.

“I feel like I’ve gained so much experience just being in the hospital and being able to tour because you can’t see something like that every day– I also got to experience it from different perspectives, from the CEO, to the doctors to the nurses.”

The Distinguished Women Shadow program connects girls with women leaders who often become life-long mentors. The program gives girls the opportunity to gain new perspectives about their future careers and leadership roles they may not have considered before.

“I think being given the opportunity to shadow a woman role model, who could potentially even become a mentor, can open a lot of avenues for a girl and allow them to think outside the box–they don’t have to stick to what would traditionally be thought of as a female role, they can become a doctor or a CEO. The exposure is very positive for a girl 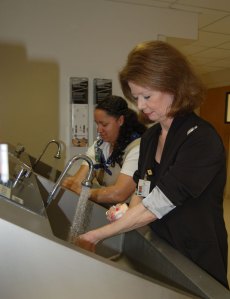