Sometimes, decorating for the holidays with the help of a kid can be more trouble than a parent can handle, but several talented local Girl Scouts from Brownie Troop 163 — under the leadership of Severna Park resident Kerry McDaniel — defied the norm, and for a good cause, too. The scouts recently designed a “girl power”-themed entry for Kennedy Krieger Institute’s 26th annual Festival of Trees.

“[The girls] really did a good job, and they took it seriously,” McDaniel said. 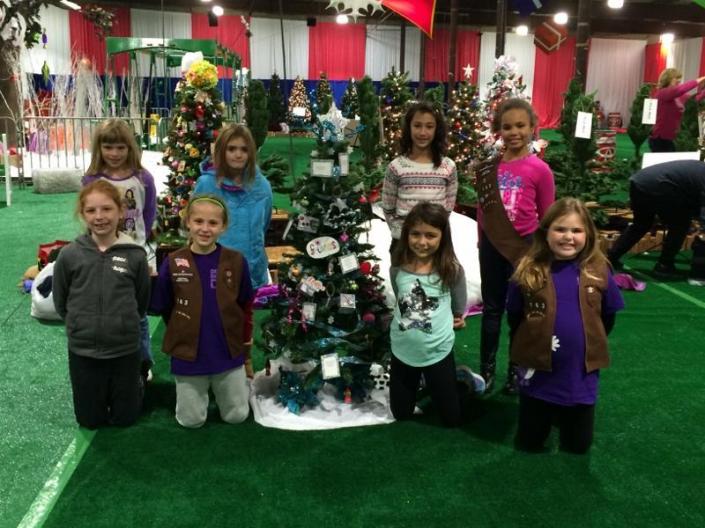 Held at the Maryland State Fairgrounds in Timonium from November 27 to 29, the extravaganza featured more than 700 themed trees, as well as gingerbread houses, wreaths and ice sculptures, which were donated by local volunteer designers. The festival annually serves as a fundraiser for Kennedy Krieger Institute in Baltimore, which improves the lives of children and young adults with disorders and injuries of the brain, spinal cord and musculoskeletal system.

McDaniel explained that her troop, which meets at Monsignor Slade Catholic School in Glen Burnie, tried to do a gingerbread entry last year. That didn’t turn out too well, she laughed, but the tree project was fabulous.

In addition to classic Christmas balls and lights, the girls decorated the tree with stars, cubes and quotes based on their girl power theme. The chalkboard stars represented each girl with a word that best described her, whether it was brave, strong, intelligent, fearless, creative or courageous.

Troop members also decorated cubes with stickers to show their hobbies, which included lacrosse, soccer and reading. They added glittery cutouts with their favorite quotes. Eight-year-old Cara Milligan chose a Bruce Lee quote: “Always be yourself, express yourself, have faith in yourself, do not go out, and look for a successful personality and duplicate it.”

Kendall McDaniel, also 8 years old, quoted Byron Katie, who said, “It’s not your job to like me. It’s mine.” Kendall explained her choice, saying, “I chose the quote because when I was little, I was called ugly and I wanted to change how I looked, and when I saw the quote, I said, ‘That perfectly describes me’ – how it doesn’t matter what people think of you. It’s what you think of yourself.”

Kerry McDaniel said the group brainstormed ideas for about a month. Once they decided on the theme, they made the decorations in two weeks. They travelled together to Timonium for the tree decoration day and had a blast. That was the best part, the girls agreed.

“I love to decorate,” Kendall said. Cara liked decorating too, especially wrapping ribbon on the tree. Eight-year-old Madison Schneider agreed that decorating was the best. “I like art and like working with my friends!” she said.

Madison’s quote was a saying by Ayn Rand: “It’s not a question of who is going to let me, but rather who is going to stop me.” The quote was empowering for Madison. “I chose it because I don’t need permission to be me. I can do whatever I want to do!”

The girls did get their choice in picking out the tree color. Kerry laughed when she said she planned on a pink tree, but the girls vetoed that decision and chose blue.

This story was originally posted on SevernaParkVoice.com.